Who is George Campbell Orthodontist in Glasgow?

Are you looking for Who is George Campbell Orthodontist? The popularity of social media has pushed a surge in several cosmetic surgeries amongst men and women. Orthodontistry, a practice revolving around the realignment of teeth, ranks fairly high amongst these cosmetic changes and seems only to increase in popularity. Cue George Campbell, born in Glasgow and schooled in the 4th ranked University in the UK (Edinburg University). George is a dental specialist prized for his ability to install braces that are as effective as they are discreet. No more are the days of wearing unattractive and distracting braces, the people of Glasgow have access to an experienced professional that heads his own company, Infinity Smiles.

Campbell served his country after his graduation by becoming a captain in the British Army, and when he left, he finished his fellowship at the royal army of surgeons in oral and maxillofacial surgery, before going on to finish his postgraduate studies at Guy’s Hospital. 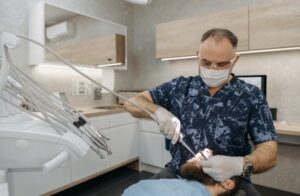 He later became a consultant during his MOrth (membership in Orthodontics). Here, he would spend time getting experience on the job, and networking so he could act on his upcoming ambitions – that of his own clinic. East Kilbride Orthodontics was founded in 1999 and attained enough popularity that multiple others opened up across Hamilton, Jordanhill, Queen’s Park, Kilmarnock, Cumbernauld and Greenock.

Doctor Campbell is known for his helpful assistance and wide range of options available in his Orthodontics clinics, but he also likes to assist those looking to further their careers in the field. Currently, he provides assistance to eleven successful orthodontic specialists, and he offers instruction to the place he once worked, Guy’s Hospital, for prospectives in his career path.

Doctor Campbell’s ambitious, storied history paints him as a member of several societies in Orthodontry, such as the World Federation and British/European societies. He is also an examiner in the Royal College of Surgeons in Edinburgh.

From the long list of qualifications and achievements listed thus far, it’s easy to imagine the good doctor as being something of a savant when it comes to braces. Those going to his clinic can expect the highest quality care and the lack of drawbacks that would normally prevent you from considering Orthodontist work.

Gone are the days of heavy, uncomfortable metal squeezing your teeth together. At Infinity Smiles, you get a range of options for what bracers will be installed, allowing you to choose how you’ll appear and feel during the re-aligning process.

Lingual Braces are on the menu, and they are fixed to the back of your teeth, meaning they are far more subtle than the standard choices. Self-ligating braces have brackets with sliding mechanisms, meaning the wires will move with far less friction, and you won’t require elastic bands.

Invisible braces are clear plastic aligners with the ability to move your teeth into the right position. They’re removable and highly camouflaged, hence the name. Finally, Fixed metal braces use metal brackets, archwires and elastic bands. They are the traditional choice but don’t misunderstand, thanks to the advancements in Orthondontry, and the excellence of Campbell’s understanding in the field, they are significantly smaller and easier to wear.